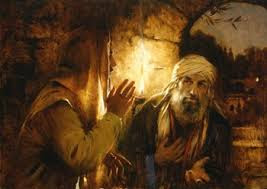 Did you sleep well last night? I hope so…Tossing and turning as the hours tick past can be a wretched experience.
I wonder if that’s what brought Nicodemus to Jesus…Perhaps he had been mulling over something he’d heard and just couldn’t sleep till he’d cleared it up.
Jesus had started a train of thought that had ended with a really burning question…it must have been pretty overwhelming to actually get him out of bed
One question to ask God’s Son…If you had that opportunity, I wonder what you’d choose…what you most long to hear answered….
Think on that.
Meanwhile, though, back to Nicodemus.
Perhaps he's afraid of what his friends and colleagues will say if he's seen approaching this controversial itinerant preacher. Hence his nocturnal ramblings.
After all, he’s a respected figure …part of the establishment with a reputation to protect. He’s not in the same position as that rag tag handful of Galilean boatmen who could just drop everything and go where Jesus lead. He’s immured in his current way of life…
He’s too old for a fresh start…. But still he comes, armed with his deductions, in search of some answers..
You see, he thinks he has worked it all out.
Jesus is undoubtedly a Rabbi sent specially by God.
That’s the only explanation for the signs and wonders he, Nicodemus, has witnessed.
In grasping that, he’s half way there but recognising a heaven-sent teacher is not in itself enough to propel a man from his bed in the small hours. Something more is nagging away but he doesn't know what,- he is just aware of that vague feeling of disquiet which is often a sign that God is trying to get through to us, if only we will stand still and listen.
Nicodemus, of course, has come to listen, to be taught, but he must have found Jesus's response at best discouraging, - positively baffling indeed. Instead of being congratulated on his perception, - he does recognise the presence of God when he sees it,- he is told that he can't even SEE the kingdom, still less enter it. He’s still way off course. He needs to be born again.
"Ah yes, born again" we say, nodding sagely, for this has become a Christian cliche over the centuries, carrying with it all sorts of associations, helpful and otherwise. It is hard to imagine how very strange the phrase sounded to Nicodemus – who is much too adult to consider a new start.
We’re confident that we know much better than him, with his literal vision of re-entering the womb
Actually, though, his confusion has much to say to us, if we really think about a new-born baby. It arrives naked, totally helpless, dependent upon others for food, warmth, love, everything it needs to help it live and thrive. In the same way, Nicodemus and all who seek the kingdom must become totally vulnerable and helpless before God, accepting that without him we can do nothing. This isn’t easy in the twenty-first century, when we tend to feel that we have conquered the world and everything in it,
It wasn’t easy for the cultured, educated Nicodemus either. Total vulnerability never is.
Then, a newborn baby comes without intellectual and emotional baggage, with literally no pre-conceptions. Nothing is impossible, impractical, foolish, beneath that hypnotic newborn gaze
In contrast, when we find ourselves challenged by the Gospel, too often our response is limited by our ideas of what is actually sensible, or socially acceptable. It takes a lot of courage to dump all that we have learned about how the world works, even when we are becoming aware of the shortcomings of the system…but if we are starting from scratch, we can be more genuinely open to the radical implications of the gospel message.
Being born again might look a bit like that
Finally, a baby and its parents in those very first newborn days can become all the world to each other, giving and receiving absolute unconditional love. There are no distractions for the baby: he knows no-one else to love, and has no idea that his parents, brimming with good intentions, will ever let him down.
Absolute unconditional love…Where else do we meet that?
You don’t need me to answer that…
It is offered to us, today and always, by the God Nicodemus yearned for day and night
The God we meet in Word and Sacrament.
the God who loved the world – not just the good, not just the Jews, not even just the Christians -
the God who loved the WORLD so much that he sent his only Son…
Posted by Kathryn at 6:43 PM 2 comments:

Fr Simon of Blessed, the alternative worship community from Gosport, has a rather splendid ministry of daily text messages...They arrive at random moments and always offer something worth reflection. Often their timing and content shout loudly "God-incidence!God-incidence!" as they feed directly into situations of which Fr S could not possibly be aware...and generally they move my thinking on in wholly positive and helpful ways.
On Ash Wednesday I was woken as  the morning text arrived,  a quote from wonderful Herbert McCabe
"When God forgives our sins, he is not changing his mind about us. He is changing our minds about him. He does not change; his mind is never anything but loving; he is love"
Familiar words, but always freshly inspiring, today they provided the backdrop for 2 wonderful Ash Wednesday services.
The day began with school worship...Timing was tight, so I couldn't even consider ashing all the children, but we did make ash by burning some nice juicy sins (written on scraps of paper) - using as our fire bowl a large Celebrations tin.
Thus, at a stroke, we not only prevented the vicar from burning the church down but introduced the idea that Lenten penitence is always fundamentally joyful...the coming together of our human need for forgiveness and God's irrepressible loving urge to forgive and restore.

But at the same time the process stirred another memory and brought home another truth.
You see paper doesn't burn well on its own.
The flames that leaped as I used the lighter soon burned out, leaving parts of the words - "Being unkind" "Being intolerant" "Forgetting to pray" still all too visibly present, reminders of a work in progress.
Then I remembered what I'd learned once before - that paper only burns successfully if you leave the source of heat there. The best approach is to have a candle in the firebox  if you want the flame to last.

For my own benefit, I'll labour the point.
If you don't stay close to the source of light, joy and forgiveness - you're left with the reality of the person you really are, in all your untransformed grubby reality.
This Lent, I'm planning, hoping and praying to take time each day to get close to God, and allow God to get on with showing me the person God has always seen and always loved when looking at me...

And that will be something to celebrate!

Not for the first time, John Bell says it best

"Take, oh take me as I am.
Summon out what I shall be.
Set your seal upon my heart
and live in me"

Email ThisBlogThis!Share to TwitterShare to FacebookShare to Pinterest
Labels: Lent

Email ThisBlogThis!Share to TwitterShare to FacebookShare to Pinterest
Labels: Looking around me

Too much or not enough?

Recently, thanks to my episcopal review, last week's retreat and a determination to avoid the dreaded burn-out, I've been spending some time pondering routes to a balanced life. Despite all the issues that I took with me, I know that by the time I left Llannerchwen last Friday I was properly present to myself, to others and indeed to God in a way that the breathlessness of parish ministry often precludes.
There are so many times here when, though I am trying my hardest to engage fully with the person in front of me, I'm horribly aware that I'm about to be late for the next appointment or am wondering what saying "Yes" to this particular request might mean for an already loaded diary...
That's just no good - for me, or for those whom I'm here to serve so it was a huge and wonderful blessing to come home without that sense of things pressing in which characterises life so much of the time...and it's a blessing I am keen to hold onto.
A bantam-buying expedition on Sunday and a flying visit to see Hugger Steward yesterday evening (OK, it's mad to drive to Cambridge and back for the sake of a 3 hour visit - but it was most definitely worth it) have helped so far, but I know that there are too many things clamouring for attention and it's hard not to be alarmed by them....
or at least, I was until a phone call with the son of the lady whose funeral I took this afternoon.
He, bless his heart, has been his mum's main carer throughout her illness and, like so many in his situation, finds himself somewhat lost now that she no longer needs his constant presence. He has mobility problems, which, he said, were now rather a blessing
"I'm glad it takes me longer to do things...it means I won't have so much time to fill now"
Perhaps, rather than agonising about the state of my diary I should just be thankful that there IS so much to get up for every morning.
And, while the sun is shining, get out to walk the dog.
Posted by Kathryn at 5:14 PM 1 comment: