Freedom in Christ - my attempt to preach after the EU Referdum 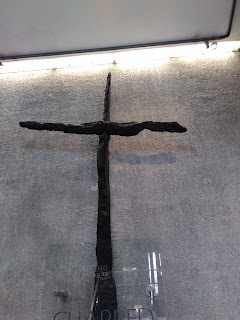 An urban myth records that when asked what he thought of western civilisation, Mahatma Gandhi replied that he thought it might be rather a good idea...and several times during the weeks of the referendum campaign I’ve sadly reflected that he was right. As feelings ran high and claim and counter claim were delivered, generating more heat than light, it seemd that our nation had lost the plot. When the news broke of Jo Cox’s murder it was almost impossible to believe...but I guess it was, in fact, simply the most extreme of many recent examples of a people biting and devouring one another in a destructive cycle, to our collective shame and diminution.

It seems that the campaign brought to the surface a whole tangle of feelings and opinions that had been buried for a while...but which are now, distressingly, in plain view.  The temptation would be, I guess, to hurry to bury them forthwith. To pretend that we hadn’t noticed those things that seem to make it so very hard to love our neighbour  and choose false peace over painful integrity. I have one godson whose views, as expressed on his Facebook page, frankly appalled me. Perhaps I should have the courage to ask him how he came to those conclusions, to explore with him the big issues, to see what common ground we might discover as we re-imagine the country to which we would like to belong.  I'm fearful, you see, that I just don't understand too many of my neighbours. I've lived in a lovely liberal bubble, shared by people whose outlook mirrored my own – and so I just didn't grasp how divided our country has become. Now I have to think again. What should I do? I could opt for running down those who voted another way, those whose world view makes little sense to me...those whom it's tempting to dismiss as ill-informed, uneducated, just plain WRONG.

I could do that – but I'm sure it's a bad idea. Perhaps I should just tell my godson that we were on opposing sides and hug him anyway (though at 26 he would probably infinitely prefer me to keep my hugs to myself). More importantly, perhaps I should try to seriously love my neighbour by working to understand what it is that shapes his world view where it differs from my own...to understand, not to patronise or tut but to understand.

I do have that choice,…So do you..

Regardless  of how we voted, regardless of our feelings of relief or distress, delight or despair, we are collectively responsible for shaping the real, every day life of our country. That has nothing to do with political rhetoric…it doesn’t even depend on economic conditions….It’s a question of the way we live day by day…for its our behaviour that will make this small island somewhere to flee from or somewhere we can still rejoice to call “home”.

Carriers of Hope tweeted yesterday that someone had heard school children telling their migrant class-mates “You're going home”...This city, which has stood for diversity and inclusion, for peace and reconciliation, could so easily become as painfully divided as the national media....

It could. But it doesn't have to.
It's our choice.

Now that we know where we’re heading,  we have an opportunity to return to our senses – and to practice a different way of being – the way that was chosen for us by Provost Howard almost 76 years ago…that lies at the heart of all that we do and all that we are here...the way of reconciliation.
We know it’s counter cultural. We know it’s hard to practice – and I have to say that  my own feelings during the final days of the campaign proved to me just how much I remain a work in progress. In all honesty if I could have called down fire from heaven on Friday I probably would have. But I know that I can do better. I know that WE can do better....and this is the moment to demonstrate that.

Almost always, at the end of a political campaign, there comes a moment of truth, when those who have secured power have the chance to live up to their promises – or not...a moment when their true colours are revealed. Today, as God's people here in Coventry we have our moment of truth, our opportunity to show our true colours...to live what we proclaim.

We meet in this place surrounded by the gifts of friends from around the world, and remember that those friends shared the ideal of international co-operation and peace-making that rose from the ashes of bombed cities in the aftermath of war. We see the refugee boat, and renew our commitment to welcome refugees, to offer hospitality to the stranger in need. On Thursday, as the voting continued, I found myself chatting to one of the uni staff attending a celebration dinner, a woman who had fled her own home in 1979 as one of the Vietnamese boat people, and rejoiced in our visible symbol of understanding and concern.  Honestly, in this building, it's hard not to make good choices. We look out through the west screens to see our beloved ruins...and cannot evade the consequences of listening to those voices that demonise the other, that dedicate themselves to enmities, strife, jealousy, anger, quarrels, dissensions, factions...and things like these.  But we stand in a place of resurrection. Truly, our Cathedral speaks of hope – but is honest, too, about the harm that humanity can cause when we are left to ourselves,

But -here's the gospel - we aren't left to ourselves.

Freedom in Christ has set us free – free to choose another way, the way of hope not hate...free to attempt the challenging work of love that reaches across the gulf caused by the hatred that divides nation from nation, race from race, class from class.
So – let us use our freedom. Having put our hand to the plough, let us not look back. The road to Jerusalem was hard for Jesus – the destination not of his own choosing – but he set his face towards it and lived out his vocation on each and every step of the way.
That's our opportunity, in these days of confusion and distress. We may not like the route ahead. We might never have chosen to head in this direction, yet still we have to keep on moving forward.

We can live out our vocation as a reconciled and reconciling people and transform the life of our city so that nobody feels marginalised, nobody feels excluded, nobody sees themselves as second class citizens.
We can build bridges – as the post war generation did, here and across Europe. We can hold onto the dream of co-operation  - and make that dream a better reality. Alone – our chances of success are slim. But – remember, we aren't left to ourselves. Let us be guided by the Spirit, who will lead us into all truth and enable us to bear fruit for God – fruit that will, by God's grace,change the world.
Posted by Kathryn at 11:38 PM No comments:

Nobody expected this.
To wake to a world that has changed so dramatically.
To realise that we had been living in a bubble with likeminded people, and so utterly failed to understand the depths of frustration and desperation that led people of good will to side with what looks, from my grieving perspective, like the force of pride and prejudice (I refuse to engage with the possibility that in some cases the good will may exist simply in my determinedly optimistic imagination).
To learn that in this wonderful, diverse city which I'm privileged to serve, so many had apparently turned away from that very diversity towards the presumed security of closed borders.
To watch as the national structures that had seemed solid and secure reeled in the face of a day when people turned out in greater numbers than for many a year to make a small cross on a ballot paper.
I'm guessing that the level of shock was last matched when Churchill was ousted in the first post-War election...
Nobody expected this.

And it would be so easy to simply vent my own feelings, to give up on this small island, to explore the possibilities that might be open through my Scots grandmother or my Irish grandfather. 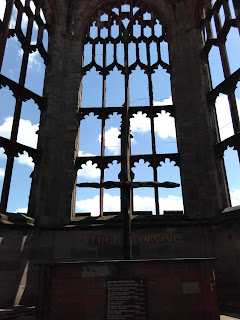 But- that's would be to invalidate my calling to THIS place at THIS time.

So, at noon, we gathered as happens every Friday in the ruins of our old Cathedral - destroyed by the tide of anger and hatred that was the 2nd World War.
We stood where Provost Howard had stood on the morning after HIS night of storm and terror - and committed ourselves once again to the way of reconciliation that he chose.
We will need to build bridges within our country as well as with our friends in other places.
We will need to try and understand one another as never before, to leave our places of safety and risk being vulnerable with those who felt they had little to lose.
We will need to carry on loving - even the leaders whose rhetoric seems to have resulted in a country polarised as never before in my lifetime.

Coventry Cathedral stands today, as it did before the Referendum, for reconciliation and for hope.
By God's grace, I will try and stand with it.
Posted by Kathryn at 12:56 PM No comments: