A time to remember - a post for Baby Loss Awareness Week

It was a long time ago now, that first experience of baby loss. I’d hardly known I was pregnant when my sleep was disturbed by fearful dreams – and in the morning, blood – so much more blood than I had imagined.


Not long married, I’d been uncertain that I even WANTED to be pregnant until that possibility was taken away, before I had really come to terms with it’s reality.


And I wept, and wept again – wondering if, like my own mother, I would now spend a decade failing to conceive, wondering if the arms that suddenly longed to hold a child might be left empty for good.


I was blessed that time. A visit to my GP to lament the fact that I felt sick and tired even though the miscarriage was now some time behind me revealed that the reason for those symptoms was a new pregnancy – not a replacement for the lost baby but a whole new focus for hopes, dreams and imaginings. And in time my daughter was born, and it was very good.


Only then it happened again. And again. And again. Each time later in the pregnancy, culminating in my little Matthew, born at 19 weeks on Bonfire Night But because of one successful pregnancy, I was told there was no need to investigate. It was, apparently, “Just one of those things”…and it was inappropriate to mourn the losses when I had a beautiful healthy daughter to enjoy.


Somehow what was appropriate didn’t matter. Mourning did.


For a while it wrecked my burgeoning relationship with God. The day I sat in a wretched heap in the car outside Brompton Oratory while my husband was at Mass, yelling at the Almighty “You needn’t think I’m going in there to worship YOU you  ****ing ****” – and heard a voice saying, quite calmly “That’s fine, Kathryn. I’ll just stay out here with you then” was a turning point – but it took a long time before I was able to LIKE God again.


Some good things, many indeed, came from the experience.


But – I might have had 7 children (maybe 9 – but perhaps we just count those positive tests that came to nothing). SEVEN! And still, 25 years since the last loss, I’m uncertain how to answer when I’m asked how many children I have.


So, in this Baby Loss Awareness Week, I’m counting them all.


Each one loved and precious to God – and to me. 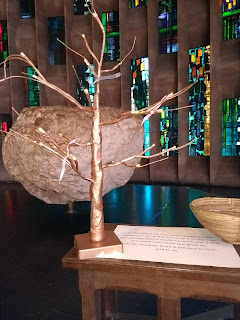