Coventry - a place I love.

Dear DCMS,
I know that today you're being inundated with pictures and tags about this remarkable city. Here are some thoughts that have been brewing gently over 4 years now. Enjoy reading them - and reflecting on our city. We love it - and it is making an extraordinary journey from despondency to joy. You have the power to help us on the way to transformation...that's really special. I hope you'll fall in love with Coventry too

Coventry.
Home for now.
A phoenix city that has reinvented itself repeatedly through history - from weaving and dyeing, to ribbons, sewing machines, bicycles, cars...and latterly, students.
A city that, not long ago, seemed to have run out of energy and resources, losing its self-belief and with it, the ability to dream.
A city that people don't visit.
A city that defines itself over and against its neighbours
"Well, of course, we're not Birmingham!"

Four years ago, my experience of Advent was unlike other years. It was, more than ever, a time of preparation, but this year as well as all the busyness of parish life, the comings and goings of schools and community groups, the 24/7 carolling, I was also preparing, beneath the surface, to be interviewed for the post I now hold. At that point, I knew little of Coventry, though in common with many thousands of others I had visited with my parents in the 1960s, had reportedly sat myself firmly on the floor by the West Screens and said, with some indignation, "You never told me that God was so BIG".
As part of the interview I was asked to give a presentation about creating a reconciled and reconciling people - and instinct suggested to me, even then, that the Cathedral itself might need to seek reconciliation with its city. This is what i wrote then...

The Cathedral stands as living symbol of resurrection and healing through brokenness....and can offer a safe space to gather and hold individual and community stories, tales of a city destroyed, reborn, and travelling onward. Sometimes those stories will seem to point to differences that cannot be resolved, divisions almost beyond healing.
For all the joy and pride in the new Cathedral, the loss of its predecessor was a real blow for the city. The night of the blitz left scars even as the whole shape of the city was redrawn. Writing of the post-war redevelopment of Ladywood, not so very far away, the parish priest of St John's pointed out ““The heart of our community was destroyed. A living, corporate personality was crushed by the bulldozers” - and the impact was significant and lasting, for all the obvious local improvements.
Similarly here the building that had evolved over generations to be a theatre of memory where the story of Jesus and the story of the city came together was replaced by an award-winning project not welcomed by all.
If stories were lost, or voices stifled, perhaps now is the time to hear them.


Perhaps too the remarkable ministry of international reconciliation you now represent, created a distance between the Cathedral and the city?  Do we need reconciliation at home as well as further afield?

I think I was onto something then - but I believe that  things are different now.
Yes, for many our Cathedral is still defined above all by a moment in history and the challenging decision of Provost Howard, the morning after the night before, to write just two words on the wall of his ruined Cathedral's sanctuary. "Father forgive", he said, and in that moment plotted our course from then on, as a place where we don't talk of "them" and "us"....where we recognise that both destructive and creative habits lie within all of us...where we understand that whatever is happening in the world, the responsibility is shared. in choosing reconciliation over retribution, he established our DNA - but that has led us to places and encounters that I imagine he could not have dreamed of.

Our reconciliation story is as powerful now as it ever was, and we continue to lean on the power of the past to build peace for the future....but there is more afoot. 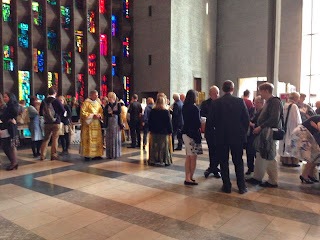 With a culture of openness and welcome that tries to reflect God's unconditional welcome of each one of us, with a programme of worship and events that is wide-ranging and sometimes challenging, with strong friendships with our neighbours at the University next door and the leaders of the city across faith, cultural and political divides, we are doing all that we can to be a space for all. I love the city and the Cathedral's place in it and look forward to working with our neighbours and partners to nurture the seeds of hope til they flourish and grow to make our city beautiful again.
Posted by Kathryn at 12:14 PM No comments: